There's a lot of talk in the law of attraction community about inspired action. What is it and how do you know when action is inspired or not?

In today's blog post, I'm going to share what I have found to be true when it comes to inspired action and that it's the only kind of action you need to take. 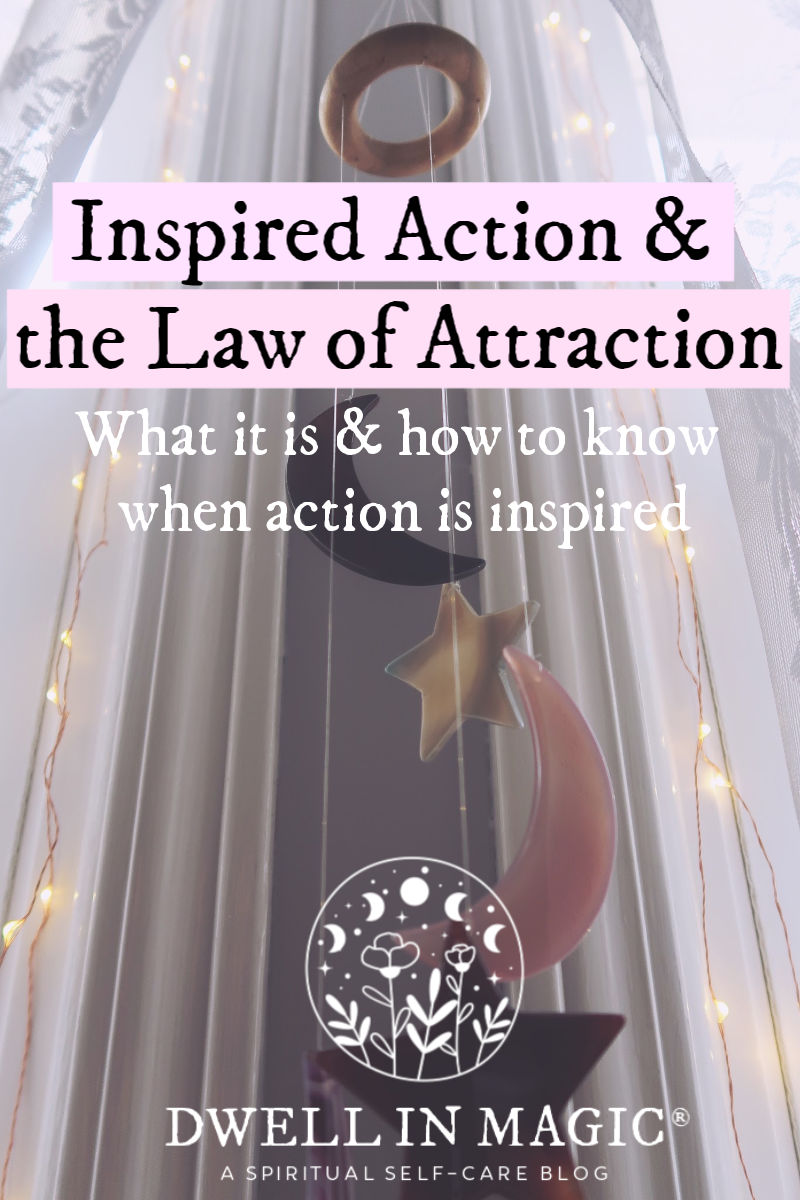 I've got a bone to pick.

If you're into the law of attraction or just learning about it, I'm sure you've heard a lot about what role action takes when it comes to manifesting your dreams. I too was confused on it for a long time, mainly because everyone around me seemed confused on it.

Lots of people put down The Secret for this very reason, because they believed the book and documentary made it look too good to be true and left out the "true" key to manifesting: action.

A lot of people say that in order to manifest, you can't just visualize and expect something to show up. There HAS to be action, they say. And the way in which they say it infers the old mentality of nothing comes that easy.

I'm here to say it does. It can. It doesn't have to be hard. You don't have to "work" for anything. Not in the sense they mean, anyway. So let's talk about this.

How the law of attraction works

Let's start with the basics so we're on the same page. The law of attraction is a universal law, like gravity, that states like attracts like. What you think about, believe, and expect is what shows up in your life.

No matter who you are or what you believe; if you're thinking about it, even on a subconscious level, that will be your life experience. Things will continually show up that prove your perception on life because you are attracting those things by the beliefs you're holding.

We are creators with our imaginations, beliefs, expectations, and desires. You don't have to believe in this for it to be working constantly in the background, just like gravity is holding you to the earth right now.

If there is a desire you have that you'd like to manifest, then you will want to change your beliefs and thoughts to come into alignment with that desire. In your mind, see yourself living that experience and feel how it would feel to be there. Get rid of any beliefs you hold that would contradict that vision.

Visualize your desire daily and feel grateful for everything you already have in your current reality.

What kind of action to take

They are still hung up in the web of old school mentality that says you have to work hard to achieve anything great. They believe it's cute to visualize and be grateful, but that the real task lies in getting out there and rolling up your sleeves.

People also don't want to sound too woo-woo by admitting they believe in anything that isn't based in our action-obsessed culture. You're considered lazy if you're not out there "hustling". You may feel like you're trying to take short cuts if you believe hard work isn't required.

Most people don't believe they deserve things unless they've traded their tears, sweat and blood for it.

But that's not true. I mean, you can make it true for you. The law of attraction can definitely set that up for you. But who would want to do that?

So then what kind of action needs to be taken, if any?

Inspired action. And what is that exactly and how can you tell the difference between inspired action and old school action?

How will you know when to take inspired action?

Inspired action comes after you've mapped out a desire that you want to manifest, you've visualized it and felt it, and you've gotten excited for it. Inspired action will then start coming in the form of ideas, suggestions, and "coincidences".

I find that it feels like one of two things: it will be action you can't stop thinking about or it will be little nudges that pop into your mind and you'll go investigate them.

When you can't stop thinking about a certain action to take, it will feel like a child who has the idea to build a cool-ass fort. The child jumps out of bed so they can go start building the fort of all forts. It's not arduous labor and they'll get lots of ideas as they go along for how to make the fort even cooler.

Action was needed and used in order to build the fort, but it was something that lit the child up. You will feel this way too when inspired action hits you. You won't be able to get it off your mind and you'll be thinking about it even when you're doing other tasks. You'll be chomping at the bit, basically.

The little nudges are honestly those types of thoughts that you don't even give a second thought because you'll usually follow the hunch. I think a lot of people worry they'll miss the boat on the intuitive nudges, but in my experience, the Universe will keep sending them until you act on one.

Recently I was struggling with anxiety regarding my health. I was sitting in my living room reading a book and the last sentence I read talked about letting go. I then heard what sounded like a scratch at my front door, so I got up expecting to find one of my cats out front wanting to come in. No animal was there, but as I stood at the door window, a big gust of wind came up and tons of leaves began falling in front of my porch. They were "letting go".

This could be mistaken for a coincidence, but when you really get into the habit of manifesting, you'll begin experiencing instances like this quite often.

Inspired action comes in form of excitement or as intuitive nudges that lead you to another idea, thought or understanding.

What keeps desires from manifesting with ease

More often than not, the one thing that holds most of us back from our desires are the beliefs we are carrying around, most of them since childhood.

Our very belief that boring, hard work needs to be exchanged for an awesome life is one of them.

I know that I still carry subconscious beliefs around self-worth that hold me back. Little by little, you discover them and replace them with a new belief.

One of my favorite things to do when I know I'm holding a lot of resistance to a new idea or something just isn't manifesting for me is to take a sheet a paper and put a line down the middle. On the left side of the paper, you write out all of your beliefs around a certain subject, like money for example. On the right side of the paper, you write down new beliefs that you would like to be true for you. Fold the paper in half and look at it at least once a day to begin reprogramming your subconscious mind to replace the negative beliefs with your new ones.

I also like to use EFT tapping and meditation to program new beliefs into my mind.

I have a worksheet for this called Discovering Self-Limiting Beliefs in my law of attraction worksheet bundle that I've used for years now because it's such a powerful exercise.

As I continue to work on my subconscious beliefs, barriers keep falling down around me and I continue further down this magical path of self-realization.

Don't believe anything that doesn't feel good to you. Working hard and taking action that doesn't feel good in order to obtain a desire is only a belief. It doesn't have to be that way. You could join the masses in their rat race of drudgery and noses to the grindstone...or you could have the excitement of a child building the best fort there ever was.

You get to choose.

Thanks for reading and I hope you enjoyed this article. What are your beliefs on inspired action? Let me know in the comments below.

For spiritual self-care tips every Sunday afternoon, you can sign up for the Dwell in Magic weekly newsletter.

If you’d like more real life examples of daily spiritual self-care, you can connect with me on Instagram.

Jessica Dimas is the author of Anything Can Be: A Reference Guide for Applying the Law of Attraction. Connect with her on Facebook and Instagram for more inspiration and updates. 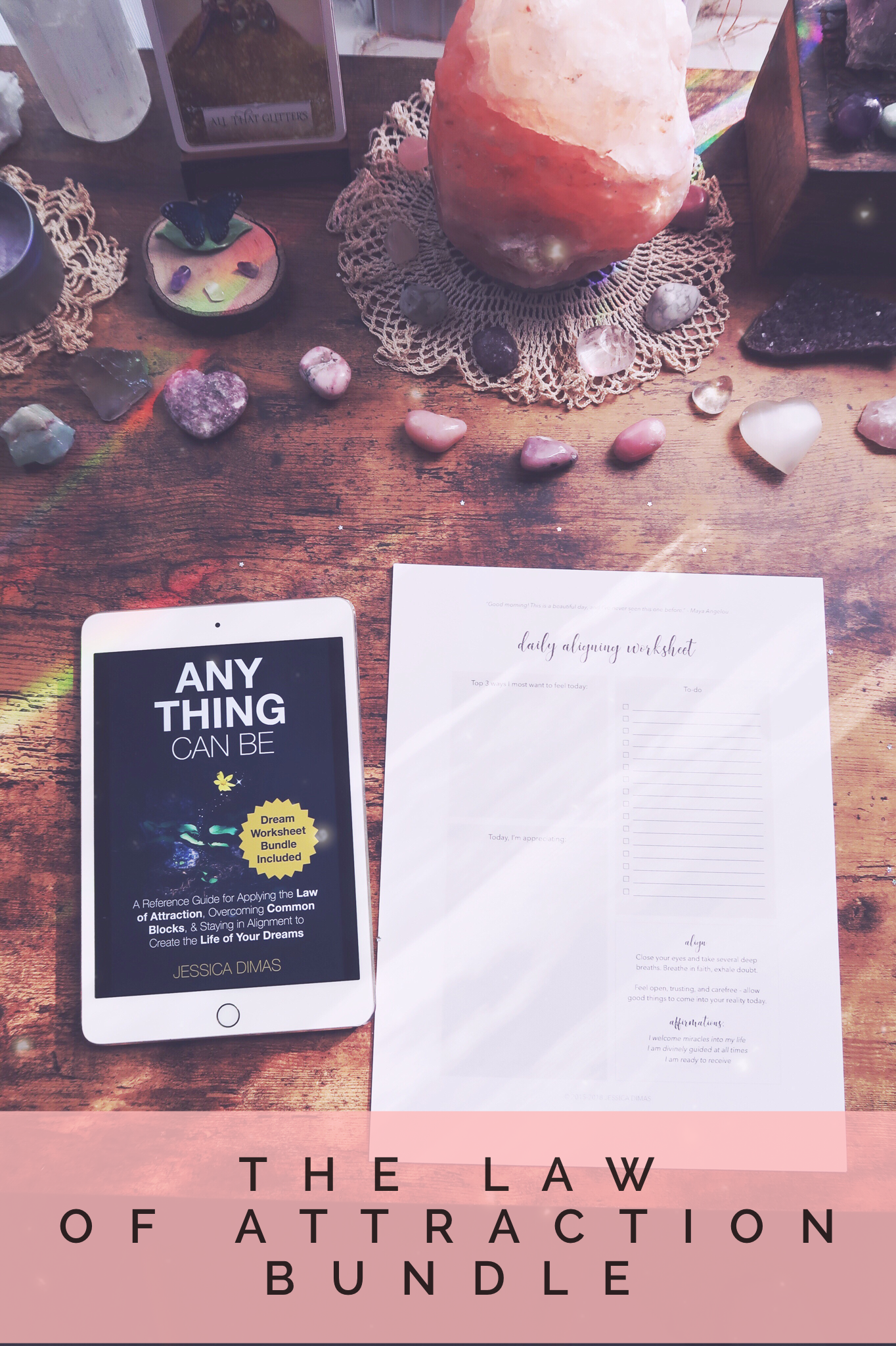 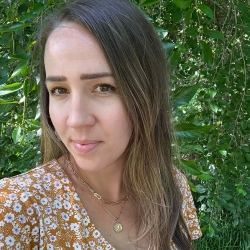 Latest posts by Jessica Dimas (see all)
« How to Begin Practicing Daily Self-Care
Manifest What You Want With These Practical, Easy Tips »
1.2K shares

Hey there, I'm Jessica. I write about spiritual awakening, self-care, and coming home to who you really are.