Anxiety is everywhere, seemingly running rampant amongst so many of us. While anxiety awareness is more new, anxiety itself has been around for a very long time.

One of the most common solutions is taking medication to control it, but that is really only pressing the mute button on a message our soul is trying to send us. What is that message, how can we hear it, and can we begin to see anxiety as an ally rather than something to defeat?

I'm sharing my anxiety story in three parts, because it was such an intense, terrifying and yet mesmerizing journey. The first part is my descent into the "upside down"; what seemed to initially cause the anxiety attacks.

Part II will be my discovery of digging deeper into the message my anxiety was bringing me, which took me back to my childhood.

Part III is the light at the end of the tunnel–the transformation anxiety took me through, what I learned and how I am actively healing and working with my anxiety instead of running from it. 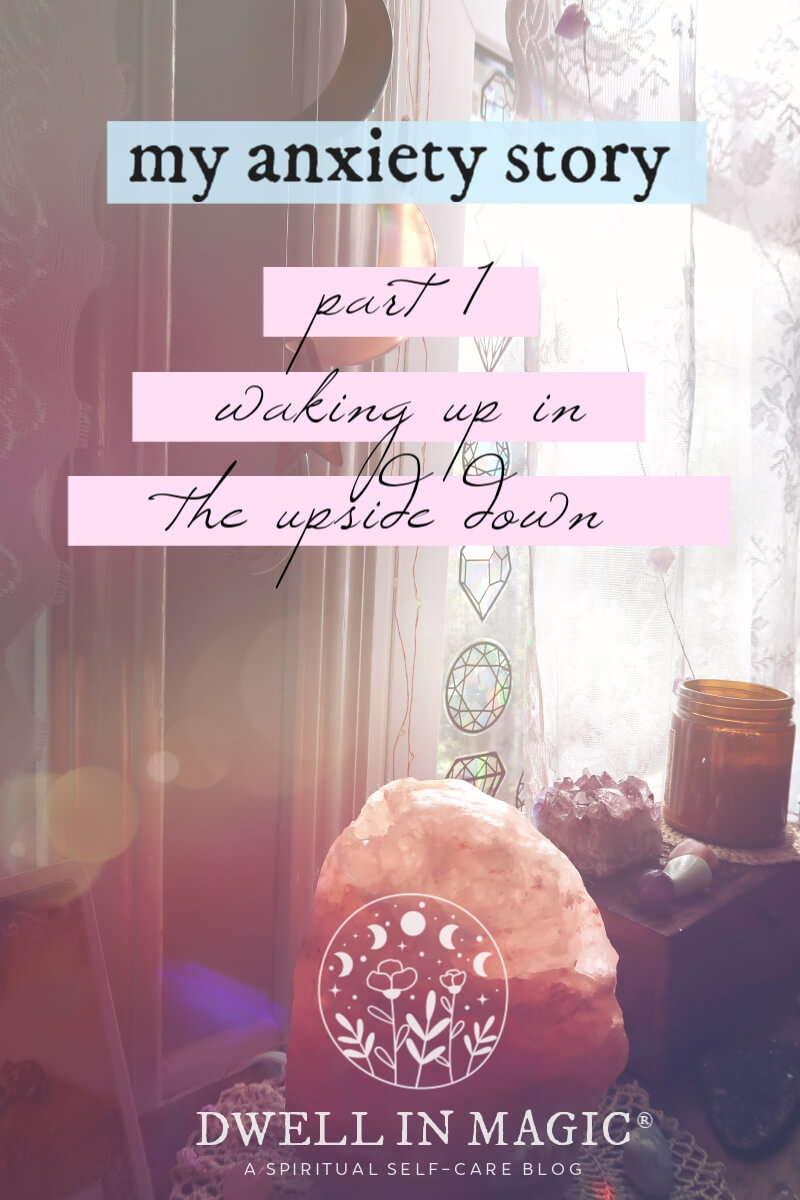 I'd first like to start out by saying that I'm not writing this for sympathy, pity or advice. Please don't leave any of that in the comments. I love discussing these things from an objective viewpoint, but sharing personal things isn't an invitation to receive unsolicited advice.

Everything I write here on the blog is written primarily to help me evolve and also to serve as a light for others to know you aren't alone out there. I never share anything here until I've fully processed it myself and am ready to put it "out there".

Anxiety is not something that I ever knew I had, but this past year I went through a series of events that took my anxiety levels so high that I was finally forced to recognized it.

This past year I can only describe as being in the "upside down". If you've seen the show Stranger Things, you know what I'm referring to. If you haven't seen it, the upside down is a place that looks identical to your world, except it's dark and you're all alone. It's like a bad dream.

I would see my children's smiling faces and a beautiful day outside my front door, but in my mind everything was dark and I couldn't let my guard down. I didn't even know it was anxiety for the first few months...it was this secret I kept because I thought it was all real and didn't want to upset anyone around me.

For me, anxiety was this awful truth that my very being was threatened and I believed I was going to die in the near future. It was definitely intense, excessive and persistent.

Anxiety, in my opinion, is essentially losing trust in life.

Setting the stage for anxiety

A little over a year ago, I moved to a new state. Back to my home state actually, which apparently held a lot of repressed emotions from my childhood, but my soul felt really good coming here.

I was grieving without realizing it.

My husband is a consultant, meaning he didn't move here with a guaranteed job. So truly, not only was I experiencing the effects of a move, but also that of a new job. Except he didn't have the new job because he had to go out and make it.

I didn't want to burden him with my emotions that I hadn't even figured out yet. I didn't know why I was crying randomly or why I felt so sad. This new side of me was in stark contrast to who I felt I was when we moved here. I had been on top of the world and now I felt like I was sinking more every day.

Meanwhile, I was feeling very pressured to help nearby family as well as help my kids to make friends and adjust to their new home. I honestly wasn't up for the task but like most women, I stuffed myself neatly into a little compartment and shoved it all away to be dealt with "later". Funny how later never really comes.

I felt like I was on one of those medieval torture wheels that pulls you apart. I was being pulled in so many directions every week and I just wanted to scream.

My life itself felt shaky and unstable. This was setting the stage for everything that was about to unfold. The stage that I now know my soul very lovingly set up.

I first began manifesting small, scary things. Lightening struck a tree right outside our window. A wasp infestation. A rat inside my car. A huge spider on my hand inside my house.

My husband traveled out of state for a total of two months a little bit after we moved into our new house. During that time, two hurricanes and a snow storm all happened. That meant an unfamiliar house that I didn't know with no electricity and two little kids depending on me to be the one who Knows What to Do.

But I didn't know what to do. I was scared sick. I began noticing every noise at night and was constantly checking to see if someone was breaking in. I was hardly sleeping because of how scared I was.

One night when the backyard motion-censored light came on, I looked outside and saw shadows moving by my basement door. Panic flooded my entire body. I ran into my kids' room and pushed the dresser in front of the door.

I semi-knew it was possible that I was just freaking out so I called my husband. When he didn't answer and I didn't hear any noises, I fell asleep absolutely exhausted between my kids.

An hour or so later, I woke up to pounding on the front door. I had the biggest feeling of dread and all I could think was "I knew it." I looked out the window and just saw a car with headlights on but I couldn't make out what.

I finally heard a man's voice saying he was an officer and was checking on me. My husband had called the police because I had fallen asleep and not answered his many phone calls back to me. The shadows I had seen that night was just a leaf blowing in the wind on the outside light.

After all that drama, I actually fell asleep as the sun was coming up with the covers over my face because my shame was so deep for everything that had happened. Deep anxiety flooded my body that night and didn't come back out.

A message from my body

Not long afterwards, while my husband was still out of town, I awoke to a painful lump near the top of my right breast on the side. My body went weak and I felt so hot and dizzy. All I could think was "I'm going to die slowly and my children are going to have to watch it happen."

It was like the grand finale of my fear show that had been playing for months. I felt I had finally manifested the scariest thing I could possibly imagine and felt such shame for doing so.

I watched my kids arguing that night with each other over something trivial, but it felt slowed down and like it was in some other dimension. I watched them and just felt such sorrow, fear and dread.

In the months that followed, I developed pain in my neck and side of my head that was on the same side of the lump. I also began to feel pain in my sides which would produce anxiety attacks that left me feeling like I had flu symptoms.

I didn't go to the doctor for 10 months. Everything felt muffled for those 10 months. I put on an award-winning performance for those around me though. You would've never guessed I was the worst I'd ever been in my life.

But that's what I knew how to do best. Anxiety and fear, I would come to learn, had shown up to finally take off this mask that I'd worn for far too long. They'd shown up to allow the sun on my face again after 33 years of living for others.

In part II of my anxiety story, I'm going to share the constructs in my life that began to crumble. This was not a feel-good time. It was terrifying, scary, but ultimately the path that led me back to myself.

I can say that easily now but I didn't know that's what was happening while it was happening. It felt like a very out-of-control period of my life that I've never experienced before. I questioned constantly why the fuck it was even happening to begin with, what had I done to bring it on and why I couldn't seem to snap out of it.

But that's the thing about these dark periods of our lives...they are never in vain, even if we can't see it in the moment. There is always an invitation being extended, for us to step into a higher understanding of ourselves.

It's not clear cut. There is no magic solution. It's a time of soul searching that leaves you pulling your hair many days, but when you finally make your way to the other side, the sun will have never seemed to shine so bright.

Thanks for reading the first part of my anxiety story. My hope is that in sharing my experience, it will help someone else out there going through something similar.

Jessica Dimas is the creator of Manifesting Magic with the Moon, a holistic self-care ritual bundle. Connect with her on Facebook and Instagram for more inspiration and updates. 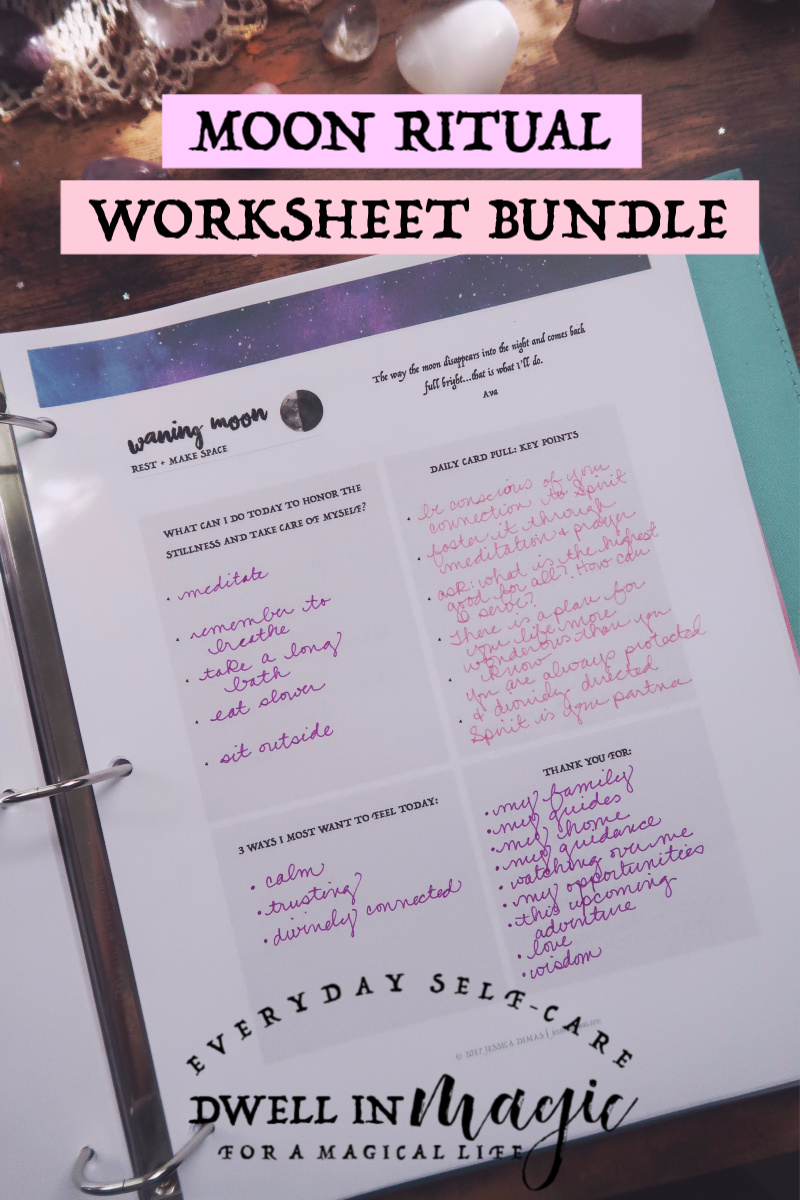 « How I Set Up My Meditation Space
My Anxiety Story: Part 2 »